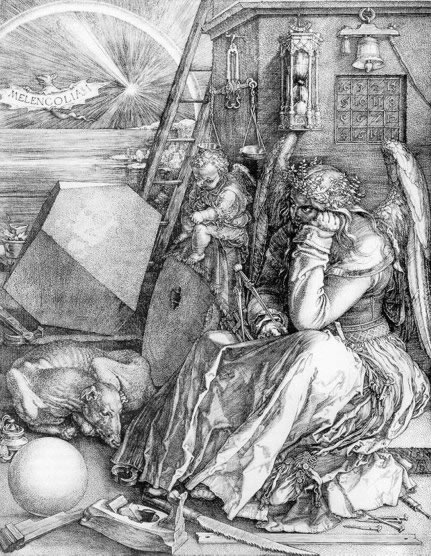 In the Introduction to his Theology of Hope, Jürgen Moltmann briefly writes about the contrary of Christian hope: the sin of despair. I think it is interesting to meditate a little bit on this inclination.

As Kierkegaard rightly said in The Sickness Unto Death, everyone is in despair (whether they know it or not), because despair is really a tension between the infinite and the finite; but, at the same time, despair is "the sin which most profoundly threatens the believer" (Moltmann, Theology of Hope, 2002, p.8).

There are many possible ways to speak of despair. I shall loosely follow here what Aquinas said about it in his Summa Theologiae (hereafter cited as ST), particularly in II-II, q.20 (De desperatione).

A first question that may arise is, Is despair really a sin?

Let's start with Eph 4:17-19, where Paul exhorts the Ephesians to no longer act as the Gentiles:

4:17Now this I say and testitfy in the Lord: that no longer you should walk as also the Gentiles walk, in the vanity of their mind,
18obscured in understanding, alienated from the life of God, because of the ignorance that is in themselves, due to the hardness of their heart.
19They, who have become apathetic, surrendered themselves with greediness to lust, in all sorts of unclean works.

These are very strong words. The key verb that interests us here is ἀπαλγέω, used in v.19 in the perfect tense, to indicate something that already happened, but which bears its effect up to the present: in this case, an ongoing attitude of the Gentiles. ἀπαλγέω means "cease to feel pain or grief", and in the verse above it is often translated as "to become callous", or apathetic1. Being apathetic, or desperate (that is, without hope), is then a source of grave sins: when one is apathetic, he easily surrenders to "all sorts of unclean works".

So, we see that from despair serious sins can be originated; but is despair itself a sin?

It is indeed: nurturing false ideas into one's mind is a sin, while, on the other hand, nurturing true ideas into one's mind is good. But thinking that one can not be reached by the grace of God is a false idea. In fact, this contradicts both the concept of a free God (if God is free, in his mercy he may well decide to save a sinner), and the actual promises that God made to us. Therefore, it is a sin to live in despair, with despair intended as the belief that it would be impossible for one to be saved by God or, stated otherwise, that God's promises would not refer also to me. Actually, due to its destructive impact, and we shall say something more about this soon, despair is such a serious sin that (ST, II-II, q.14, a.2) it is placed among the sins against the Holy Spirit; and these are sins that, according to Mark 3:28-29, are "eternal", that is, unpardonable.

A similar path of reasoning applies to the opposite of despair, that is presumption, also a sin against the Holy Spirit: where desperation entails the false belief that God does not care (so to speak) about sinners, or that one cannot convert from his sins, presumption entails the false belief that, regardless of the sins one may commit, he will be saved anyway. Therefore presumption, like desperation, is also a sin.

So, despairing is a grave sin. But can one become desperate, and at the same time still be a believer? Or does despair only touch those who have no faith, or have lost theirs?

Faith is an all-encompassing attitude to life, one that shapes one's entire existence. In fact, believing is something that covers all-important universal concepts. Despair, on the other hand, is an "appetite", a particular disposition of man. Indeed, it is common experience that, while we may believe in some universal truth, when dealing with particular situations of life we fail to adhere to those truths, due a particular disposition of ours. So it is perfectly possible that a faithful person, due to a particular disposition of his (perhaps a difficult period of his life, perhaps a downcast moment), "lapses" into desperation. Therefore, it is certainly possible for a faithful to despair. Actually, as Kierkegaard said, it is common and maybe even unavoidable for all of us to despair! (unavoidable because, to use Kierkegaard's terminology, each of us has a created self, which compares itself with the uncreated God.) But there faith comes to the rescue. What is important, is that through faith we try to recover the true reasons of hope, and resist completely giving in to desperation. And this is all the more important, once we consider the destructiveness of the sin of despair.

In itself, there is no greater sin than hating God; but since per spem revocamur a malis et introducimur in bona prosequenda (ST, II-II, q.20, a.3, "through hope we are removed from evils, and we are induced to seek for good things"), conversely, not having hope at all (as in despair) induces us into repeated and most grave sins, as Paul said in Eph 4:19. In a sense, therefore, there is no greater sin than despair: despair robs man of his humanity. Despair generates - we could say - a sort of progressive environmental pollution.


These are the words that Dante puts at the entrance of Hell. The message is clear: where all hope is left out -- there, it is Hell.

At this point, an interesting question is certainly, Where does this despair come from? What is its origin? As I wrote above, despair being a disposition, or an "appetite", there may be several secondary causes to it. For example, stressful or unexpected situations, putting our faith to the test. But there is also a very common cause for despair, one that gives raise to attitudes like the tedium vitae, an attitude of laziness, boredom, slothfulness or being apathetic, that causes us to loose interest in life itself. This is what has also been called the "don't-care feeling". I shall call this cause with its Latin name, acedia. It is thinking of acedia that I decided to insert a picture of Albrecht Dürer's enigmatic engraving "Melencolia I" above2.

And indeed despair does arise from acedia. In fact, hope is hope in something that is difficult, but possible to obtain. Despair, on the other hand, is the attitude that believes that it will be impossible for one to obtain the things that should be hoped for. But the more one is downcast, or filled with sloth, the more it will be difficult for him to avoid despair. This slothfulness is the contrary of the joy that the believer has all rights to have: as Aquinas puts it, homo in tristitiis constitutus non de facili aliqua magna et jucunda cogitat, sed solum tristia. (ST, II-II, q.20, a.4, "a man who is full of sorrow does not easily think of great and joyful things, but only of sad things.")

That is, "By slothfulness (indolence, עצלה, ‛atslâh) the roof sinks in, and by idleness of the hands the house leaks."
עצלה is the feminine form of עצל, ‛âtsêl, the slothful, sluggard, about whom see e.g. Pr 13:4:

That is, "The soul of the slothful desires, and gets nothing; but the soul of the diligent shall be satisfied."3
The slothful may even have faith, that is, desire of knowing God and getting happiness, but his slothfulness renders this desire ineffective and useless; in other words, desperate.

Acedia is then something that blocks our desires, even desires of good things. In particular, acedia destroys spiritual life: where once there was joy in God, there is now nothing, or at most sorrow. What is destroyed is our creativity, our hopes, our potential of being full human beings: with acedia, we are reduced to a sense of helplessness and uselessness. In this sense, acedia is the opposite of charity.

So, how does one recover from acedia? By looking at its opposite, charity. A life lived in charity is a life where slothfulness has no place, and it is in charity, in openness to God and to our fellow human beings, that our God-given gifts are free to come out. But let's not mistake the Christian caritas for "human charity": true charity strictly depends on the intimate relation we are able to build with God; essentially, charity is friendship, but first of all friendship toward God. The more we relate to God, the more we relate to man and its meaning; the more we relate to God, the less boredom, tedium, and despair will be able to affect us. Aquinas rightly says that quanto magis cogitamus de bonis spiritualibus, tanto magis nobis placentia redduntur, ex quo cessat acedia. (ST, II-II, q.35, a.1, "The more we think about spiritual goods, the more pleasing they become to us, and from this sloth dies away.")

A few words to conclude then.

A theology of hope always starts from faith, and to faith must always return. But faith can eventually be destroyed by attitudes like slothfulness, or acedia, and despair. It is despair that brings us to an halt, that stops us from looking forward and thinking high, it is despair that carries with it that nihilistic "don't-care feeling". Despairing should not be seen as an inescapable, ultimate sickness, as an existential condemnation of man: it can and perhaps it will occur to us, but it should and can be resisted; and the way to resist and contrast it is through what could be called as the real human activity, the real charity, the source of hope, the action upon which all other actions depend: seeking to deepen our relationship with God.

It is through that, that our hope may become a truly theological, and therefore transformative, hope.

1 I have translated ἀπαλγέω as to become apathetic because this seems to render well its origin from the verb ἀλγέω, to suffer, plus the particle ἀπό, denoting separation, or cessation. The BDAG explains ἀπαλγέω as "to be so injured that one is not bothered by the implications of what one is doing, become callous, dead to feeling, without a sense of right and wrong", which fits quite nicely with the idea and consequences of hopelessness. Cmp. also Eph 2:12, where the Ephesians are described as ἐλπίδα μὴ ἔχοντες καὶ ἄθεοι ἐν τῷ κόσμῳ, that is, having no hope and without God in the world.

2 Seeing Melencolia I as the personification of melancholy is a popular theory, due to the extensive research of the art historian Erwin Panovsky, but other explanations have also been proposed. For an example, see The Relativity of Albrecht Dürer, by D.R. Finkelstein. It is fair to add that melancholy, as intended by Dürer, was probably not to be conceived in a completely negative way: as the comment at http://www.wfu.edu/art/pc/pc-durer-melencolia.html says, "melancholy was a divine gift. It could be dangerous, but also capable of leading a person into greatness. It was the delicate balance between madness and genius." In the context of this post, I simply take the engraving as a powerful way to visually stress the impact of the dark component inherent in such inclinations as acedia.

3 חרץ, chârûts, is here translated as "diligent", and this is perhaps not a very clear translation; the word comes from the verb חרץ, chârats (sorry for the missing vocalization), meaning cut, sharpen, decide. Often the opposition between the sluggard and חרץ is one of slackness versus work, as, for example, in Pr 10:4, "A slack hand causes poverty, but the hand of the diligent makes rich"; and the root of the word, sharpen, points to sharpness and activity, characteristics of the "diligent". There is possibly also a suggestion to another meaning of חרץ , i.e. gold. Let me also mention the beautiful translation of the Vulgate: vult et non vult piger anima autem operantium inpinguabitur, where that vult et non vult renders very well the inner movement of the piger, contrasted, according to the above, to the diligent/operans.